The three WA men were arrested by Australian Federal Police officers on 30 December 2021 after a joint agency investigation launched when Australian Border Force officers found the drugs hidden in a 550-kilogram shipment of latex bed pillows.

ABF officers in Fremantle examined the consignment after it arrived on a container ship.  After examining the goods within the container they found anomalies within the latex pillows, which they carefully deconstructed.  Officers located a crystal-like substance which was subsequently referred to the ...

Three men have been charged by the Victorian Joint Organised Crime Taskforce (JOCTF) for an alleged attempt to import 140 kilograms of methamphetamine into Australia concealed in catering equipment.

The men faced Melbourne Magistrates Court via video link on Wednesday (17 November 2021) and were remanded in custody, accused of facilitating the importation of the drugs from Canada into Melbourne.

The drugs have an estimated value of more than $88 million if sold as individual street deals.

The Victorian JOCTF consists of members ...

Three men will appear in Southport Magistrates Court for allegedly importing 1.5 kg of cocaine inside a PlayStation 5, which was bound for the Gold Coast.

The cocaine had an estimated street value of $346,500, more than six times the median Australian annual wage.

The men were charged after a suspicious consignment sent from Portugal to Sydney was identified.

On examination of the package by officers from Australian Border Force (ABF) a white powder, which tested as cocaine, was found concealed within a ...

A 29-year-old Queensland woman has faced Southport Magistrates Court charged with allegedly importing about 14kg of methamphetamine from Mexico.

Presumptive testing of a white powder concealed in the boxes returned a positive result for methamphetamine.

The matter was referred to the Australian Federal Police and officers created a replica consignment that was delivered to a Surfers Paradise address.

Two Adelaide men have each been sentenced to 12 years jail over a plot to import 18 kilograms of methamphetamine, worth up to $7 million, hidden in 4WD winches from Malaysia.

The South Australia National Anti-Gangs Squad (NAGS) launched an investigation into one of the men in February 2019, after Australian Border Force officers at Perth Airport examined his phone when he returned from a Bali holiday and found images of cash and what appeared to be illicit drugs.

Man’s Attempt to Import $8 Million Worth of Illicit Cigarettes

The investigation began after ABF officers detected approximately 800 hidden boxes of cigarettes in a sea cargo consignment at Port Botany. The goods had been declared as ‘brake shoe’. A deconstruction of the content of the shipping container revealed almost eight million illicit cigarettes, which had a total Customs duty payable of more than $8 million.

A 54 year old man has been arrested in Adelaide after Australian Border Force (ABF) officers located undeclared firearm parts concealed within his baggage on return to Australia from the United States of America.

Upon his return to Australia, the South Australian man was subject to a baggage examination by ABF officers at Sydney Airport, following forensic intelligence received from the Australian Federal Police.

During the baggage examination, officers located a number of firearms parts that would enable the assembly of a complete ... 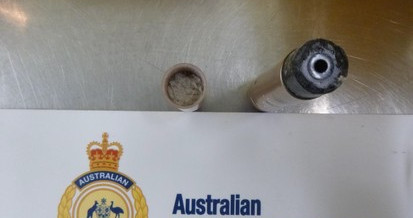